Deputies Locate Missing Woman After Six Days in the Wilderness 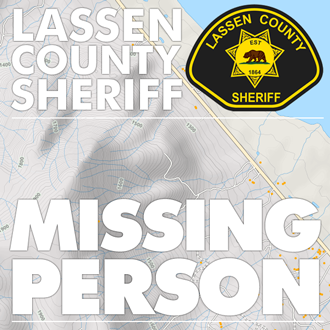 A Little Valley woman is home safe and sound today after spending nearly a week stranded in a remote area of Lassen County near Highway 44, living off one six-pack of yogurt and eating snow to survive.

“They spent the night in their vehicle, and in the morning, the vehicle’s battery was dead,” explains LCSO Lieutenant David Woginrich.

At this point the pair attempted to walk back to Highway 44.

“Sheena began falling behind as the soles of her boots had come off. Justin continued walking ahead and soon they became separated. Justin went back to find Sheena, but because of heavy snowfall, he was unable to find her.”

Lonich sought shelter and built a campfire. The next morning, he continued walking until he came to a gravel road. He again sought shelter for the night. The next day, Lonich was able to reach Highway 44, where he hitched a ride into Susanville from a passerby.

Thereafter, he reported what happened and Sheena was stranded in the forest, possibly with their vehicle.

“Initially, details of this incident were unclear and made it difficult for Sheriff’s Office personnel to narrow down a search area. Justin was not familiar with the area and the roads they had been traveling on. ”

“From the time Justin reported this incident, Sheriff’s deputies, sergeants, detectives, and US Forest Service personnel conducted ground searches every day. On one day, when the weather was clear, the California Highway Patrol flew the search area in a helicopter in conjunction with a ground search team, but they were unable to locate the vehicle or Sheena. Further searches from the air were unable to be conducted due to inclement weather.”

In the late morning of April 20th, Lonich rode along with a Sheriff’s deputy in the search area to help provide a better location of where he and Sheena became stuck in the snow.

A Sheriff’s sergeant, along with two US Forest Service personnel, were also in the search area looking for Sheena.

The Sheriff’s sergeant transported Sheena to the Bogard Ranger Station to be evaluated by medical personnel.

“She related the same details as Justin did as to how they became separated. During the six days Sheena was stranded, she rationed a six-pack of yogurt, eating one per day. She did not have any water and had been eating snow. She saw the helicopter fly over a few days earlier, but because she was in a heavily wooded area, they were unable to see her.”

Woginrich and the Sheriff’s Office Command Staff commended the efforts of all personnel involved in searching for and locating Gullett, “Through their efforts, Sheena was found safe and is now back home. Also, special thanks go out to the California Highway Patrol and the US Forest Service for their assistance.”