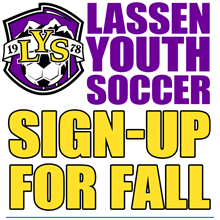 Online registration for Lassen Youth Soccer’s fall season will be open until May 31st, with a special discount for those who sign-up by this Friday.

The league’s season is scheduled to start on August 24th.

If you register before May 8th there is a $10 per player discount. Just head on over to www.lassenyouthsoccer.org.

Registration fees are based on age:

Player assessments for U10 and U12 players will be held at a date to be announced later.